Discrete-component biasing for MOSFET amplifiers is accomplished with the circuits shown in Figure 21. The gate-to-source voltage determines the type of circuit which may be required for that transistor configuration. For an enhancement mode transistor, there will always be a need for a positive voltage at the gate. In the voltage division biasing, there will be an R1 and R2 in order to obtain the positive voltage. For depletion MOSFETs or JFETs, R2 can either be finite or infinite, as shown in Figure 21(b). 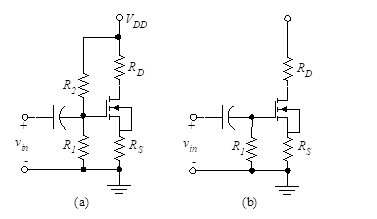 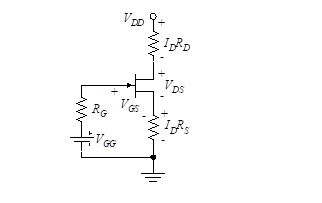 Each of these configurations is studied in more detail in Section 9, “FET Amplifier analysis”.

Since the different configurations only vary in their connections via the capacitors, and the capacitors are open circuits to dc voltages and currents, we can study the dc bias for the general case. For amplifier design, we want the transistor to operate in the active operating region (also identified as the saturation region or pinch-off mode), so we assume the pinch-off I-V characteristic for the device. (We should always verify this assumption at the end of the design!)

To simplify the bias analysis, we use a Thevenin source to model the circuit at the gate of the transistor as shown in Figure 22.

Since there are three unknown variables to set for biasing (ID, VGS, and VDS), we need three dc equations. First, the dc equation around the gate-source loop is written.

Notice that since the gate current is zero, a zero voltage drop exists across RG. A second dc equation is found from the Kirchhoff’s law equation in the drain-source loop.

in section ” Junction field-effect transistor (JFET)” which is repeated here.

The first approximation applies if |λVDS| << 1 (which is nearly always true) and simplifies the solution of the coupled equations considerably.

into a similar format that will prove useful in design.

Equations (25)-(28) are sufficient to establish the bias. For discrete MOSFET amplifiers, we do not need to put the Q-point in the center of the ac load line as we often did for BJT biasing. This is because discrete FET amplifiers are normally used as the first stage in an amplifier chain to take advantage of the high input resistance. When used as a first stage or preamplifier, the voltage levels are so small that we do not drive the output of the preamplifier over large excursions.