We have seen that the op-amp can be used as an amplifier, or as a means of combining a number of inputs in a linear manner. We now investigate several additional important applications of this versatile linear IC. 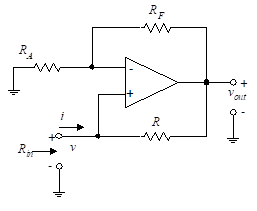 The circuit shown in Figure (17) produces a negative input resistance (impedance in the general case).

This circuit can be used to cancel an unwanted positive resistance. Many oscillator applications depend on a negative resistance op-amp circuit. The input resistance, Rin, is the ratio of input voltage to current.

A voltage divider relationship is used to derive the expression for v– since the current into the op-amp is zero.

We now let v+ = v– and solve for vout in terms of vin, which yields,

Since the input impedance to the v+ terminal is infinite, the current in R is equal to iin and can be found as follows:

The input resistance, Rin, is then given by

A dependent-current generator produces a load current which is proportional to an applied voltage, vin, and is independent of the load resistance. It can be designed using a slight modification of the negative-impedance circuit. The circuit is shown in Figure 18 (a).

Suppose we let RF = RA. Equation (47)then indicates that the input resistance to the op-amp circuit (enclosed in the dashed box) is -R. The input circuit can then be simplified as shown in Figure 18(b). We wish to calculate iload, the current in Rload. Although the resistance is negative, the normal Kirchhoff’s laws still apply since nothing in their derivations assumes positive resistors. The input current, iin, is then found by combining the resistances into a single resistor, Rin.

Among the many applications of this circuit is a dc regulated voltage source. If we let vin = E (a constant), the current through Rload is constant independent of variations of Rload. 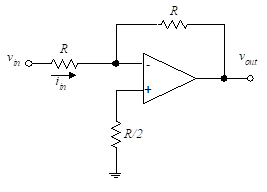 The circuit of Figure (19)  produces an output voltage that is proportional to the input current (this can also be viewed as a unity-gain inverting amplifier). We analyze this circuit in using the properties of ideal op-amps.  We solve for the voltages at the input terminals to find

Hence, the output voltage, vout = -iinR, is proportional to the input current, iin.

The circuit of Figure (20), is a voltage-to-current converter. We analyze this circuit as follows:

As an alternative, the circuit shown in Figure (21) provides a voltage-to-current converter with one end of the load resistance grounded. 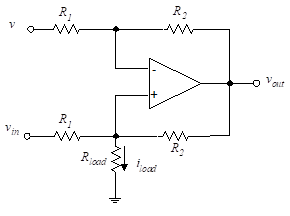 We analyze this circuit by writing node equations as follows:

The last equality uses the fact that v+ = v–. There are five unknowns in these equations (v+, vin, vout, v, and iload). We eliminate v+ and vout to obtain,

The load current, iload, is independent of the load, Rload, and is only a function of the voltage difference, (vin – v).

Figure 22 – Use of generalized impedance in place of resistance

The relationship of Equation (17) is easily extended to include non-resistive components if Rj is replaced by an impedance, Zj, and RF is replaced by ZF. For a single input, as shown in Figure 22 (a), the output reduces to

Since we are dealing in the frequency domain, we use uppercase letters for the voltages and currents, thus representing the complex amplitudes.

One useful circuit based on Equation (55) is the Miller integrator, as shown in Figure 22(b). In this application, the feedback component is a capacitor, C, and the input component is a resistor, R, so

In Equation (56) , s  is the Laplace transform operator. For sinusoidal signals,

. When we substitute these impedances into Equation (55) , we obtain

In the complex frequency domain, 1/s corresponds to integration in the time domain. This is an inverting integrator because the expression contains a negative sign. Hence the output voltage is

where vout(0) is the initial condition. The value of vout is developed as the voltage across the capacitor, C, at time t = 0. The switch is closed to charge the capacitor to the voltage vout(0) and then at t = 0 the switch is open. We use electronic switches, which we discuss more fully in Chapter 16. In the event that the initial condition is zero, the switch is still used to reset the integrator to zero output voltage at time t = 0. 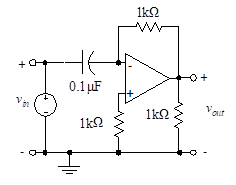 Figure 23 – Example of an inverting differentiator

If the feedback element is a resistor, and the input element is a capacitor, as shown in Figure (23), the input-output relationship becomes

In the time domain, this becomes

The circuit is operating as an inverting differentiator. Note that the input capacitor, Za = 1/sC, does not provide a path for dc. This does not affect the result since the derivative of a constant is zero. For simplicity, let’s use a sinusoidal input signal. Rearranging Equation (59) and substituting the numeric values for this circuit, we obtain

Results of the simulation are shown in Figure (24).

We may also use the waveforms to show that this circuit performs the task of an inverting differentiator. We will confirm that the output waveform represents the slope of the input signal times a constant. The constant is the voltage gain of the circuit. The greatest rate of change of the input voltage waveform occurs at its zero-crossing. This corresponds with the time that the output waveform reaches its maximum (or minimum). Picking a representative point, say at time0.5 ms, and using graphical techniques, we compute the slope of the input voltage waveform as

Scaling this rate of change (i.e.,

Let us solve for the current, i(t), in the circuit of Figure 25. The input voltage is the driving function and the initial conditions are zero. We write the differential equation for the circuit as follows:

Now solving for di/dt, we obtain

From Equation (65) we see that -di/dt is formed by summing three terms, which are found on Figure 26 at the input to the first integrating amplifier.

(67)
is the output of the second integrator (Integrator 2). Since the sign must be changed, we sum it with the unity gain inverting summer (Summer).
The output of the first integrator is +i, as seen from Equation (66). The constants in the differential equation are established by proper selection of the resistors and capacitors of the analog computer. Zero initial conditions are accomplished by switches across the capacitors, as shown in Figure 22(b). 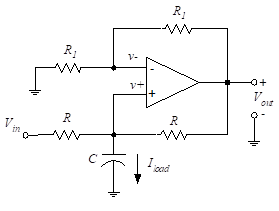 We use a modification of the dependent current generator of the previous section to develop a non-inverting integrator. The circuit is configured as shown in Figure 27.
This is similar to the circuit of Figure 21, but the load resistance has been replaced by a capacitance. We now find the current, Iload. The inverting voltage, V-, is found from the voltage division between Vo and V- as follows:

where s is the Laplace transform operator. The Vout /Vin function is then

Thus, in the time domain we have

The circuit is therefore a non-inverting integrator.

The operational amplifier is a very useful building block for electronic systems. The real amplifier operates almost as an ideal amplifier with very high gain and almost infinite input impedance. For this reason, we can treat it in the same way we treat circuit components. That is, we are able to incorporate the amplifier into useful configurations prior to studying the internal operation and the electronic characteristics. By recognizing the terminal characteristics, we are able to configure amplifiers and other useful circuits.
This chapter began with an analysis of the ideal operational amplifier, and with development of equivalent circuit models using dependent sources. The dependent sources we studied early in this chapter form the building blocks of equivalent circuits for many of the electronic devices we study in this text.
We then explored the external connections needed to make the op-amp into an inverting amplifier, a non-inverting amplifier, and a multiple input amplifier. We developed a convenient design technique eliminating the need for solving large systems of simultaneous equations.
Finally, we saw how the op-amp could be used to build a variety of more complex circuits, including circuits which are equivalent to negative impedances (which can be used to cancel the effects of positive impedances), integrators and differentiators.