Most operational amplifiers are comprised of a series of transistors, resistors, and capacitors forming a complete system on a single chip. The amplifiers available today are reliable, small in size, and consume very little power.

The input stage of most op-amps is a Differential Amplifier as shown in its simplest form in Figure 1. 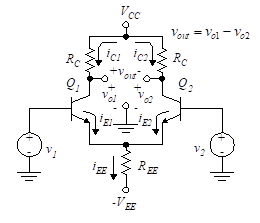 The differential amplifier is composed of two emitter-coupled common-emitter dc amplifiers. It has two inputs, v1 and v2, and three outputs, vo1, vo2 and vout. The third output, vout, is the difference between vo1 and vo2.

The differential amplifier does not operate linearly with large signal inputs. In order to simplify the analysis we assume that RE is large, that the base resistance of each transistor is negligible and that the output resistance of each transistor is large. Note that we use REE rather than RE in the differential amplifier since the resistor used here is large and may be the equivalent resistance of a current source. The large value of REE keeps the emitter resistor voltage drop nearly constant.
We now solve this circuit for the output voltage. We begin by writing a KVL equation around the base junction loop for the circuit of Figure 1.

We need to find expressions for the collector currents, iC1 and iC2. The base-emitter voltages are given by the equation,

In Equation (2) Io1 and Io2 are the reverse saturation currents for Q1 and Q2 respectively. The transistors are assumed to be identical. Combining Equations (1) and (2) yields

Solving Equation (3) for the current ratio, we find,

Linear amplification occurs only for input voltage differences less than approximately 100 mV. In order to increase the linear range of the input voltage, small emitter resistors can be added.

Any two input voltages, v1 and v2, can be resolved into a common and a differential part. We define two new input voltages as follows:

If we set the two input voltages equal, we have

Since the two inputs are equal, the emitter-base junction voltages are equal (if the transistors are identical). Thus, the collector currents must also be identical. 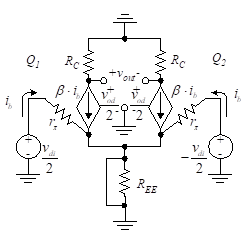 We now view the equivalent circuit for the differential-mode input voltage as shown in Figure 2(a). Note that as the current in the Q1 circuit increases, the current in the Q2 circuit decreases at the same rate and amplitude. This is true since the input to Q2 is equal to that of Q1 but 180o out of phase. Thus the voltage change across REE is zero. Since the ac signal voltage across REE is zero, it can be replaced by a short circuit in the ac equivalent circuit. Note that placing voltages at each transistor base which are equal in amplitude but 180o out of phase is equivalent to placing a voltage between the two transistor bases of twice the amplitude. The voltages at vo1 and vo2 are of equal amplitude but opposite phase and the differential-mode gain is

A similar analysis can be applied to the common-mode equivalent circuit in Figure 2(b). 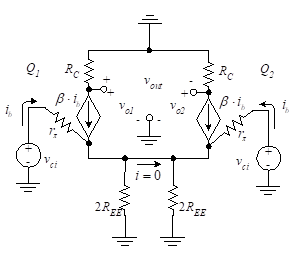 If we divide the resistor REE into two parallel resistors each having double the original resistance, we can find the output by analyzing only half of the circuit. Since the transistors are identical and the common-mode input voltages are equal and in-phase, the voltages across the 2REE resistors are the same. Thus, the current between the two parallel resistors shown for is zero and we need only look at one side of the circuit. The common-mode voltage gain is then

We find the double-ended output voltage in terms of the common-mode and differential-mode gain as follows:

Now for the common-mode input, we look into the amplifier in Figure 2(b). Thus, the input resistance is

These results indicate that the input resistance of the common mode is much higher than that of the differential mode.

It is desirable to make REE as large as possible in order to reduce the common-mode output. Equation shows that to make the CMRR large we must make REE large. Since large resistances are hard to fabricate on IC chips, we seek an alternate approach. This is accomplished by replacing REE with a dc current source. An ideal current source has infinite impedance, so we investigate the possibility of replacing REE with such a current source. Figure 9.3 illustrates a differential amplifier where the resistor, REE, is replaced with a constant-current source.

The closer the source is to the ideal constant-current source, the higher the common-mode rejection ratio. We illustrate a diode-compensated fixed-bias current source. The compensation makes the operation of the circuit less dependent on temperature variations. Diode D1 and transistor Q3 are selected so that they have nearly identical characteristics over the range of operating temperatures.
In order to analyze the circuit of Figure 3(a) and find the CMRR, we need to determine the equivalent resistance, RTH (the Thevenin equivalent of the constant current source circuit). The equivalent resistance is given by [see Figure 3(b)]

Writing a KCL equation at node 1, we have

where ro is the internal resistance of the transistor at the specified operating point. It is given by 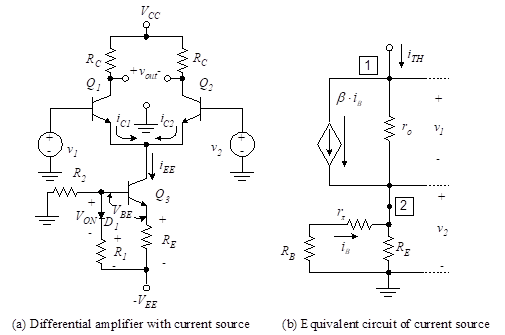 A KCL equation at node 2 yields

Substituting v1 and v2 into the equation at node 2, we have

Finally, the Thevenin resistance is given by substituting  Equations (22) and (23) into Equation (18) .

We will now make a series of assumptions to greatly simplify this expression. To maintain bias stability, we use the guideline that

Substituting this value of RB in Equation (24) and dividing by β, we have

We can simplify this expression by noting

Since the second term in this equation is much greater than the first, so we can ignore RE to obtain

This equation can be further simplified if the following condition exists:

In that case, we have the simple result

Hence, if all of the approximations are valid, RTH is independent of β and its value is quite large.

Figure 4 shows a differential amplifier where the second input, v2, is set equal to zero and the output is taken as vo1.

We use a constant current source in place of REE, as discussed in the previous section. This is known as a single-ended input and output amplifier with phase reversal. The amplifier is analyzed by setting v2 = 0 in the earlier equations. The differential input is then simply

so the output is 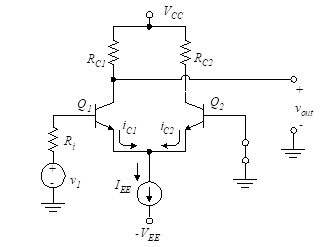 The minus sign indicates that this amplifier exhibits an 180o phase shift between the output and input. A typical sinusoidal input and output are illustrated in Figure 5.

If an output signal is to be referenced to ground but a phase reversal is not desired, the output can be taken from transistor Q2.

Solution: The current through REE is found at the quiescent condition. Since the base of Q2 is grounded, the emitter voltage is VBE = 0.7 V, and

The quiescent current in each transistor is one-half of this amount.

the differential voltage gain in each transistor is

The common-mode voltage gain is

The common-mode rejection ratio is then given by

Solution: We place the transistor operating point in the middle of the dc load line.

Then, referring to the current source of Figure 3(a),

The CMRR is given by 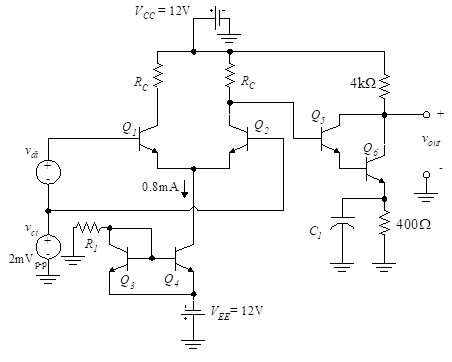 Solution: We shall treat the circuit in three sections: 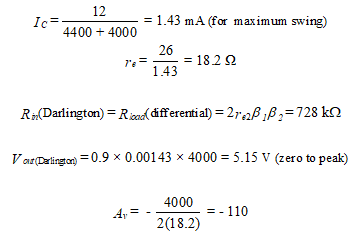 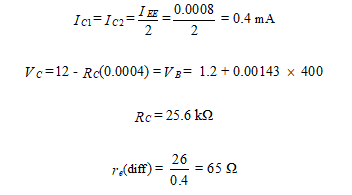 Now for the total system, we have 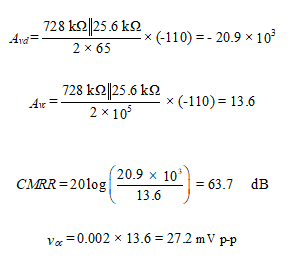