Most operational amplifiers are designed and constructed in accordance with the block diagram shown in Figure 8.

Figure 8 – Typical configuration of an op-amp

Op-amp circuits are packaged in standard IC packages, including cans, dual-in-line packages (DIP), and flat packs. Each of these packages has at least eight pins or connections. They are illustrated in Figures 9, 10, and 11. 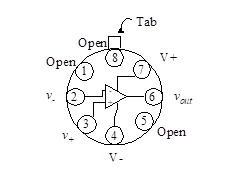 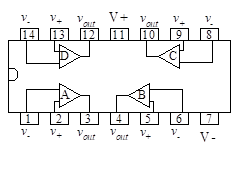 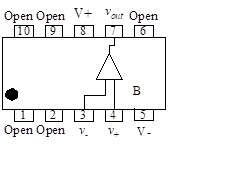 When constructing a circuit, it is important to identify the various leads correctly (they are usually not numbered). The figures illustrate the location of pin 1. In the can package of Figure 9, pin 1 is identified as the first pin to the left of the tab, and the pins are numbered consecutively counterclockwise looking from the top. In the dual-in-line package of Figure 10, the top of the package has an indentation to locate pin 1, and the pins are numbered down on the left and up on the right. Note that more than one op-amp (typically 2 or 4) is packaged in one DIP.

In the flat pack of Figure 11, pin 1 is identified by a dot and the pins are numbered as in the DIP.

Many op-amps require both a negative and a positive voltage source. Typical voltage sources range from ±5 V to ±25 V. Figure 12 shows typical power supply connections to the op-amp.

The maximum output voltage swing is limited by the dc voltage supplied to the op-amp. Some operational amplifiers can be operated from a single voltage source. The manufacturer’s specifications define the limits of operation in those cases where the op-amp uses only one power supply. 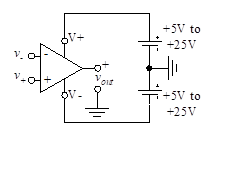 The maximum output voltage swing is limited by the dc voltage supplied to the op-amp. Some operational amplifiers can be operated from a single voltage source. The manufacturer’s specifications define the limits of operation in those cases where the op-amp uses only one power supply.

The μA741 op-amp is illustrated in the equivalent circuit of Figure 13. It has been produced since 1966 by most IC manufacturers, and although there have been many advances since its introduction, the 741 is still widely used.

The 741 op-amp has internal compensation which refers to the RC network which causes the high-frequency amplitude response to fall off. Because the amplifier has high gain (on the order of 104 to 105 at low frequencies) and because parasitic capacitances in the transistors allow parasitic feedback, the op-amp would become unstable and oscillate if it were not for the internal compensation. Two cascaded difference amplifiers drive a complementary symmetry power amplifier through another voltage amplifier.

The 741 op-amp consists of three stages: an input differential amplifier, an intermediate single-ended high gain amplifier, and an output buffering amplifier. Other circuitry important to its operation is a level shifter to shift the dc level of the signal so that the output can swing both positive and negative, bias circuits to provide reference currents to the various amplifiers, and circuits that protect the op-amp from short circuits at the output. The 741 is internally compensated by means of an on-chip capacitor-resistor network.

The 741 circuit includes a number of transistors that are normally cut off and conduct only in the event that a large current exists at the output. The bias on the output transistors is then changed to reduce this current to an acceptable level. In the circuit of Figure 13, this short-circuit protection network consists of transistors Q15 and Q22 and resistor R11.

The input stage of the 741 is a differential amplifier with an active load formed by transistors Q5, Q6, and Q7 and resistors R1, R2, and R3. This circuit provides a high resistance load and converts the signal from differential to single-ended with no degradation of gain or common-mode rejection ratio. The single-ended output is taken from the collector of Q6. The input stage level shifter consists of lateral pnp transistors, Q3 and Q4, which are connected in a common-base configuration.

The intermediate stages in most op-amps provide high gain through several amplifiers. In the 741, the single-ended output of the first stage is connected to the base of Q16 which is in an emitter follower configuration. This provides a high input impedance to the input stage which minimizes loading. The intermediate stage also consists of transistors Q16 and Q17, and resistors R8 and R9. The output of the intermediate stage is taken from the collector of Q17, and provided to Q14 through a phase splitter. The capacitor in the 741 is used for frequency compensation which is discussed in subsequent chapters of this text.

The small resistors, R6 and R7, provide current limiting at the output. The Darlington pair, Q18 and Q19, is used in place of the diode in the diode-compensated complementary symmetry output stage as described in Chapter 8. The Darlington pair arrangement is favored over the two transistors connected as a diode since it can be fabricated in a smaller area. The current source substituting for the bias resistor in the complementary symmetry circuit is realized by one part of transistor Q13. Transistors Q22, Q23, and Q24 are part of a level shifter arrangement which insures that the output voltage is centered around the zero axis.