The loop equation is given by,

The equivalent input resistance is then

We now consider the inverting amplifier with two inputs. 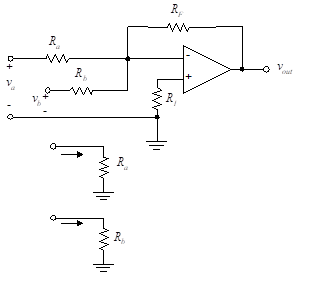 It is a special case of the circuit of Figure (4) “Op-amp circuit” shown previously.

Since the voltage at the inverting input to the op-amp is zero (virtual ground), the input resistance seen by va is Ra, and that seen by vb is Rb. The “grounded” inverting input also serves to isolate the two inputs from each other. That is, a variation in va does not affect the input vb, and vice versa.

No current passes through R1 since the v+ input to the op-amp has infinite resistance. As a result, Rin to a non-inverting terminal is infinity. If a design needs a large input resistance, we often use a single-input non-inverting op-amp. Such a configuration is called a non-inverting buffer if it has a voltage gain of unity.

Therefore the situation changes when we go to a multiple input non-inverting op-amp, as shown in Figure 12(b). The equivalent circuit is shown in Figure 12(c). We are assuming that the resistance associated with each source, (r1, r2 and r3) is zero ohms. When applying the test source to calculate the input resistance for multiple-input circuits, we use superposition. We therefore apply the test source at each input separately while disabling the other inputs (short circuits for voltage sources and open circuits for current sources in accordance with the principle of Superposition). The various input resistances are then

Analyze the following circuits online using the TINACloud circuit simulator by clicking the links below.

This concept can easily be extended to n inputs. 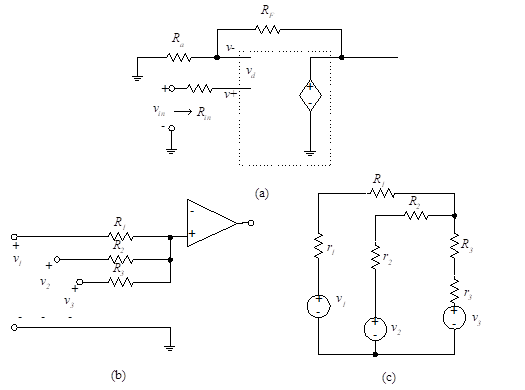