PREVIOUS- 4. FET Amplifier Configurations and Biasing
NEXT- 6. Comparison of MOSFET to JFET

When MOSFET transistors are fabricated as part of an integrated circuit, practical considerations require two major changes in circuit configurations. First, the large coupling and bypass capacitors used in discrete amplifiers cannot practically be fabricated in integrated circuits because of the small size. We get around this shortcoming by fabricating direct-coupled amplifiers.

The second major change is that we cannot easily fabricate the resistors used as part of the bias circuitry. Instead, we use active loads and current sources comprised of MOS transistors.

Integrated circuits use both NMOS and PMOS circuitry. CMOS is more common in digital circuitry, while NMOS is typically used for higher density ICs (i.e., more functions per chip).

For the NMOS enhancement load, the relationship between voltage and current is given by

The equivalent resistance of this configuration is 1/gm, where the value of the transconductance is that which applies at the bias point.

Now that we have two techniques to simulate active loads, we can address the biasing issue. We use the active load in place of the load resistance in any of the circuit configurations. To show the technique for analyzing these, let us consider the NMOS amplifier using an enhancement load, as shown in Figure 24.

The transistor labeled Q2 replaces RD of our earlier circuitry. To determine the quiescent operating point, we use the same techniques as we did in Section 4, “FET Amplifier configurations and biasing” only substituting the enhancement load graphical characteristic for the resistor load line. That is, we need to find the simultaneous solution of the FET transistor characteristics with the equation for the load line. We can do this graphically as shown in Figure 25. 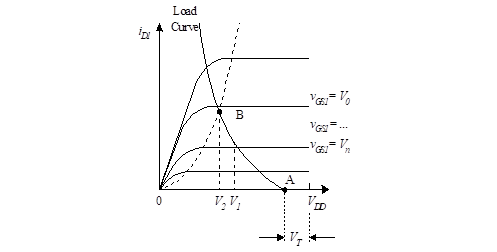 Figure 25 – Graphical solution for the Q-point

Now that we know how to simulate an active load, we turn our attention to the generation of a reference current to be used as part of the input bias circuitry. These current sources are used in much the same way that we used them for BJT amplifier biasing.

Putting the various subcircuits together (i.e., the active load and the reference current) results in the CMOS amplifier of Figure 27.

The gain of this amplifier is given by 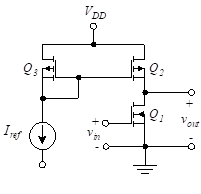 Our discussion of Section  “2. Metal-oxide semiconductor FET (MOSFET)” referred to the substrate (or body) of the MOSFET. This substrate plays an important role in establishing the channel. In the operation of discrete MOSFETs, the body is often connected to the power source. In such cases, the substrate has no direct effect on the operation of the device, and the curves developed earlier in this chapter apply.

The situation changes when MOSFETs are fabricated as part of integrated circuits. In such cases, the substrate of each individual transistor is not isolated from other substrates. Indeed, a substrate is often shared among all of the MOSFETs on a chip. In a PMOS IC, the shared substrate would be connected to the most positive source terminal, while in NMOS it is connected to ground (or to a negative supply if present). This establishes a reverse bias between the source and the body of each transistor. The effect of this reverse bias is to change the operating characteristics. For example, in an n-channel device, it effectively raises the threshold (VT). The amount by which the threshold changes depends on physical parameters and the device construction. For NMOS, this change can be approximated by

In Equation (32), γ is a device parameter which varies between about 0.3 and 1 (V-1/2). VSB is the source-to-body voltage, and  is the Fermi potential. This is a property of the material, and a typical value is 0.3 V for silicon.

PREVIOUS- 4. FET Amplifier Configurations and Biasing
NEXT- 6. Comparison of MOSFET to JFET