PREVIOUS- 2. The inverting amplifier
NEXT- 4. Input resistance of op-amp circuits 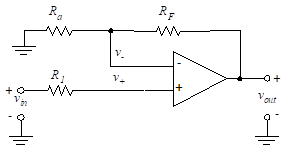 We analyze this using the basic properties of the ideal op-amp. Since the current through R1 is zero,

Writing a node equation at the v– node yields,

The non-inverting gain is then given by,

Figure (6)  illustrates a circuit with two input voltages. To find v+, we apply Kirchhoff’s current law to the non-inverting input terminal to yield (recall that the input current to the op-amp is zero),

Solving then for v+, we obtain

The inverting voltage, v–, is found from the node equation at v– with the result,

Analyze the following circuit using circuit simulation with TINACloud to determine Vout in terms of the input voltages by clicking the link below.


In a practical sense, it is important to briefly consider the effects of loading on the op-amp. The method we have been using for analysis yields the correct voltage gain,  based on the assumption that the current required from the dependent source of the ideal op-amp model is within the range set forth by the manufacturer’s data sheet for a real op-amp. Although we explore the practical considerations in later chapters, the next two examples illustrate the concept.

When analyzing both the inverting and the non-inverting configurations, we must be certain that the op-amp is capable of supplying sufficient current to drive the load resistor.

Analyze the following circuits using the TINACloud online circuit simulator to determine Vout in terms of the input voltages by clicking the links below.

PREVIOUS-2. The inverting amplifier
NEXT-4. Input Resistance of op-amp circuits