Figure 29(a) illustrates the non-inverting amplifier, and Figure 29(b) shows the equivalent circuit.

The input voltage is applied through R1 into the non-inverting terminal.

The input resistance of this amplifier is found by determining the Thevenin equivalent of the input circuit. The load resistance is normally such that Rload >> Ro. If this were not true, the effective gain would be reduced and the effective value of Ro would be the parallel combination of Ro with Rload. Let us again define  and R’F = RF + Ro. We shall neglect R1, since it is so much less than Rin. Now since Rload >> Ro, we can reduce Figure 29(a) to the simplified form of Figure 30(a). 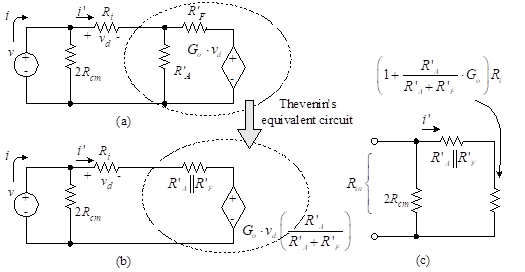 We find the Thevenin equivalent of the circuit surrounded by the elliptical curve, resulting in Figure 30(b). In Figure 30(c), the resistance to the right of 2Rcm is given by v/i’. In order to evaluate this, we write a loop equation to obtain

The input resistance is the parallel combination of this quantity with 2Rcm.

Recall that , R’F = RF + Ro, and Rload >> Ro. If we retain only the most significant terms and note that Rcm is large, Equation (55) reduces to

where we again use the zero-frequency voltage gain, Go.

Equation (56) can be used to find the input resistance of the 741 op-amp. If we substitute the parameter values as given in Table 1, Equation (56) becomes

We again use the assumptions that Rcm is large, that is R’F » RF and R’A » RA. Then the output resistance of a 741 op-amp is given by

Calculate the input resistance for the unity-gain follower shown in Figure 31(a).

Solution:  The equivalent circuit is shown in Figure 31(b). Since we assume the zero-frequency gain, Go, and the common-mode resistance, Rcm, are high, we can neglect the term

compared to (1+Go)Ri. Equation (57) cannot be used since RA = 0. The input resistance is then given by

We wish to determine the voltage gain, A+ for the non-inverting amplifier of Figure 32(a). 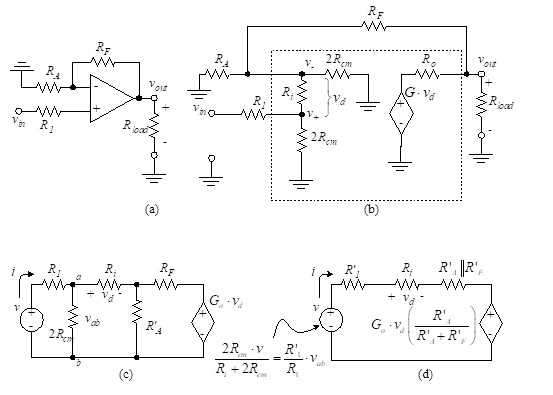 This gain is defined by

The assumed conditions are desirable in order to prevent reduction of the effective gain. The operation of taking Thevenin equivalents modifies the dependent voltage source and the driving voltage source as in Figure 32(d). Note that

The output voltage is given by

Solving for the current, i, we obtain

The voltage gain is given by the ratio of output to input voltage.

As a check of this result, we can reduce the model to that of the ideal op-amp. We use the zero-frequency gain, Go, in place of G in Equation (64) and also the following equalities.

which agrees with the result for the idealized model.

Find the gain of the unity-gain follower shown in Figure 33.

so vout = vin as expected. 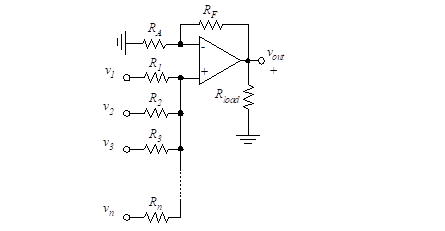 to achieve bias balance. The output resistance is found from Equation (52).

As a specific example, let us determine the output voltage of the two-input summer of Figure 35.

The output voltage is found from Equation (68) , as follows: