Here’s how to arrange for the maximum power transfer.

1. Find the internal resistance, RI. This is the resistance one finds by looking back into the two load terminals of the source with no load connected. As we have shown in the Thevenin’s Theorem and Norton’s Theorem chapters, the easiest method is to replace voltage sources by short circuits and current sources by open circuits, then find the total resistance between the two load terminals.

2. Find the open circuit voltage (UT) or the short circuit current (IN) of the source between the two load terminals, with no load connected.

Once we have found RI, we know the optimal load resistance
(RLopt = RI). Finally, the maximum power can be found

In addition to the maximum power, we might want to know another important quantity: the efficiency. Efficiency is defined by the ratio of the power received by the load to the total power supplied by the source. For the Thevenin equivalent:

and for the Norton equivalent:

Using TINA’s Interpreter, it is easy to draw P, P/Pmax, and h as a function of RL. The next graph shows P/Pmax, the power on RL divided by the maximum power, Pmax, as a function of RL (for a circuit with internal resistance RI=50).

Now let’s see the efficiency h as a function of RL.

The circuit and the TINA Interpreter program to draw the diagrams above are shown below. Note that we we also used the editing tools of TINA’s Diagram window to add some text and the dotted line.

Now let’s explore the efficiency (h) for the case of maximum power transfer, where RL = RTh.The efficiency is:

which when given as a percentage is only 50%. This is acceptable for some applications in electronics and telecommunication, such as amplifiers, radio receivers or transmitters However, 50% efficiency is not acceptable for batteries, power supplies, and certainly not for power plants.

Another undesirable consequence of arranging a load to achieve maximum power transfer is the 50% voltage drop on the internal resistance. A 50% drop in source voltage can be a real problem. What is needed, in fact, is a nearly constant load voltage. This calls for systems where the internal resistance of the source is much lower than the load resistance. Imagine a 10 GW power plant operating at or close to maximum power transfer. This would mean that half of the energy generated by the plant would be dissipated in the transmission lines and in the generators (which would probably burn out). It would also result in load voltages that would randomly fluctuate between 100% and 200% of the nominal value as consumer power usage varied.

To illustrate the application of the maximum power transfer theorem, let’s find the optimum value of the resistor RL to receive maximum power in the circuit below.

Click/tap the circuit above to analyze on-line or click this link to Save under Windows
We get the maximum power if RL= R1, so RL = 1 kohm. The maximum power:

A similar problem, but with a current source:

The following problem is more complex, so first we must reduce it to a simpler circuit.Find RI to achieve maximum power transfer, and calculate this maximum power.

Click/tap the circuit above to analyze on-line or click this link to Save under Windows
Finally the maximum power:

We can also solve this problem using one of TINA’s most interesting features, the Optimization analysis mode.

To set up for an Optimization, use the Analysis menu or the icons at the top right of the screen and select Optimization Target. Click on the Power meter to open its dialog box and select Maximum. Next, select Control Object, click on RI, and set the limits within which the optimum value should be searched.

In older versions of TINA, you can set this mode from the menu, Analysis/Mode/Optimization, and then execute a DC Analysis.

After running Optimization for the problem above, the following screen appears: 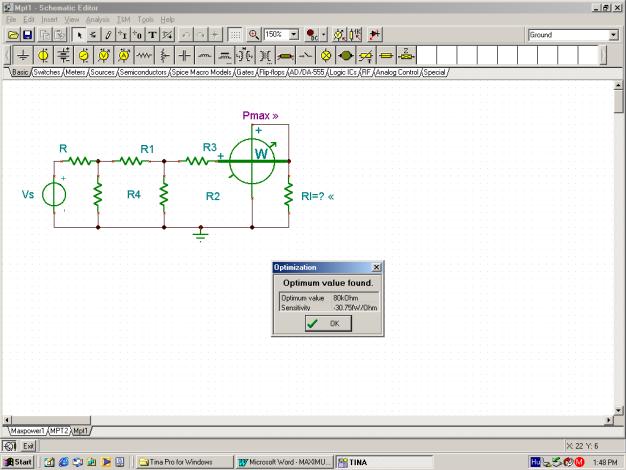 After Optimization, the value of RI is automatically updated to the value found. If we next run an interactive DC analysis by pressing the DC button, the maximum power is displayed as shown in the following figure.