A sinusoidal voltage can be described by the equation:

Here are a few examples to illustrate the terms above.

The properties of the 220 V AC voltage in household electrical outlets in Europe: 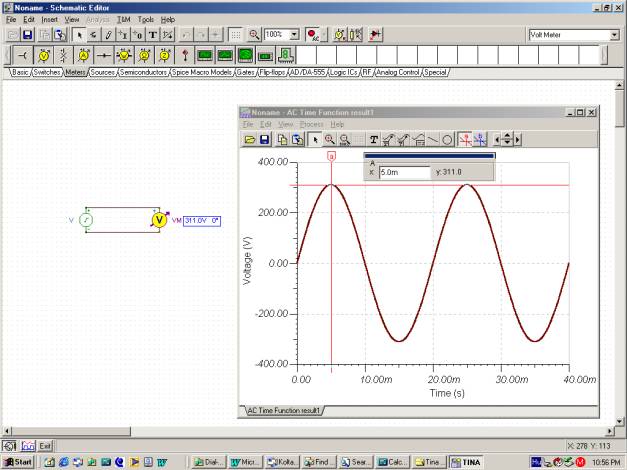 The properties of the 120 V AC voltage in the household electrical outlet in the US:

The initial phase plays an important role when several voltages are present simultaneously. A good practical example is the three-phase system, where three voltages of the same peak value, shape and frequency are present, each of which has a 120° phase shift relative to the others. In a 60 Hz network, the time functions are:

The following figure made with TINA shows the circuit with these time functions as TINA’s voltage generators.

Note that the peak of vAB (t) is approximately 294 V, larger than the 170 V peaksof the vA(t) or vB(t) voltages, but also not simply the sum of their peak voltages. This is due to the phase difference. We will discuss how to calculate the resulting voltage (which is Ö3 * 170 @ 294 in this case) later in this chapter and also in the separate Three-phase Systems chapter.

Though an AC signal continuously varies during its period, it is easy to define a few characteristic values for comparing one wave with another: These are the peak, average and root-mean-square (rms) values.

We have already met the peak value VM , which is simply the maximum value of the time function, the amplitude of the sinusoidal wave.

It can be shown that the absolute average of a sinusoidal wave is:

These values can be calculated the same way for both voltages and currents.

The rms value is very important in practice. Unless indicated otherwise, power line AC voltages (e.g. 110V or 220V) are given in rms values. Most AC meters are calibrated in rms and indicate the rms level.

Example 1 Find the peak value of the sinusoidal voltage in an electrical network with 220 V rms value.

Example 2 Find the peak value of the sinusoidal voltage in an electrical network with 110 V rms value.

Example 3 Find the (absolute) average of the sinusoidal voltage if its rms value is 220 V.

Example 4 Find the absolute average of the sinusoidal voltage if its rms value is 110 V.

Example 5 Find the ratio between the absolute average (Va) and rms (V) values for the sinusoidal waveform.

Note that you cannot add average values in an AC circuit because it leads to improper results.

As we have already seen in the previous section, it is often necessary in AC circuits to add sinusoidal voltages and currents of the same frequency. Though it is possible to add the signals numerically using TINA, or by employing trigonometric relations, it is more convenient to use the so-called phasor method. A phasor is a complex number representing the amplitude and phase of a sinusoidal signal. It is important to note that the phasor does not represent the frequency, which must be the same for all phasors.

There are two forms of complex numbers: rectangular and polar.

The rectangular representation is in the forma + jb, where j = Ö-1 is the imaginary unit.

The polar representation is in the form Aej j , where A is the absolute value (amplitude) and f is the angle of the phasor from the positive real axis, in the counterclockwise direction.

We will use bold letters for complex quantities.

Now let’s see how to derive the corresponding phasor from a time function.

First, assume that all the voltages in the circuit are expressed in the form of cosine functions. (All voltages can be converted to that form.) Then the phasor corresponding to the voltage of v(t) = VM cos( w t+f) is: VM = VMe jf , which is also called the complex peak value.

The corresponding phasor is:

Bringing it to polar form:

Phasors are often used to define the complex effective or rms value of the voltages and currents in AC circuits. Given v(t) = VMcos(wt+r)= 10cos(wt+30°)

Vice versa: if the complex effective value of a voltage is:

then the complex peak value:

A short justification of the above techniques is as follows. Given a time function
VM (cos( w t+r), let’s define the complex time function as:

By introducing the complex time function, we have a representation with both a real part and an imaginary part. We can always recover the original real function of time by taking the real part of our result: v(t) = Re {v(t)}

To demonstrate the advantage of using phasors, let’s see the following example.

Example 6 Find the sum and the difference of the voltages:

First write the phasors of both voltages:

and then the time functions:

As this simple example shows, the method of phasors.is an extremely powerful tool for solving AC problems.

Let’s solve the problem using the tools in TINA’s interpreter.

The amplitude and phase results confirm the hand calculations.

Before performing the analysis, let’s make sure that the Base function for AC ia set to cosine in the Editor Options dialog box from the View/Option menu. We will explain the role of this parameter at Example 8.

The circuits and the results:

Click/tap the circuit above to analyze on-line or click this link to Save under Windows
Again the result is the same. Here are the time function graphs:

Example 7 Find the sum and the difference of the voltages:

Now the phasors of the voltages are:

and then the time functions:

Let’s solve the problem using the tools in TINA’s interpreter.

Find the sum and the difference of the voltages:

Let’s see the solution to this example using the sine functions as the base of the phasors (transforming sin( w t) to the real unit phasor (1) ).

Note that the phasors are exactly the same as in Example 6 but not the time functions:

As you can see, it is very easy to obtain the result using sine functions, especially when our initial data are sine waves. Many textbooks prefer to use the sine wave as the base function of phasors. In practice, you can use either method, but don’t confuse them.

Let’s solve the same problem using TINA’s interactive mode. Since we want to use sine functions as the base for creating the phasors, make sure that the Base function for AC is set to sine in the Editor Options dialog box from theView/Option menu.

The circuits for making the sum and difference of the waveforms and the result:

and the time functions:

Welcome to DesignSoft
Lets chat if need any help finding the right product or need support.